Modern linguistics is characterized by some reorientation connected with the study of language not so much as a system organization, but as a communicative-pragmatic one. Each author creates his unique linguistic world. An important element of the creation of idiostyle is occasionalism as a result of a combination of creative imagination, aesthetic taste and individual perception of reality.One of the word-makers in the domain of the individual-author’s nomination is V. Korzh. For objective reasons, in modern linguistic literature, there are no monographic works devoted to the analysis of lexical innovations V.Korzh this time, which determines the relevance of the proposed article. The purpose of the research is to describe the semantics and features of the functioning of occasionalisms in the artistic speech V. Korzh, to clarify the role of individual author neologisms in the formation of a writer’s idiollect. Material for discovering innovations served nine poetic collections. In the analyzed works about three hundred and twenty individual author neologisms were recognized. Nomenclature V. Korzh’s innovations can be combined into several lexical-semantic groups, the most numerous of which are occasional personages. V. Korzh’s idiostyle is characterized by the active use of the individual-author nomination of persons, mostly with a negative assessment. Such neolexemes present the author’s worldview. Much of the innovation is motivated by socio-political problems. The body of adjective occasionalisms of the writer plays an expressive artistic and figurative role in the idiostyle of V. Korzh. The adjective neolexemes characterize a person, an object or a phenomenon on various grounds. The perspective question is investigation of pragmatical potential of these innovations.
Як цитувати
Лощинова, І. (1). ІНДИВІДУАЛЬНО-АВТОРСЬКІ НЕОЛОГІЗМИ В ІДІОСТИЛІ ВІКТОРА КОРЖА. Журнал «Український смисл», (1). Retrieved із https://ukrsense.dp.ua/index.php/USENSE/article/view/223
Завантажити посилання
Номер
№ 1 (2019): Український смисл
Розділ
ЛІНГВІСТИКА ТЕКСТУ 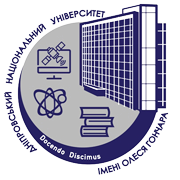